SOHO STUDIOS are an open space for art, culture and social exchange and offer an infrastructure for many new ideas. SOHO STUDIOS are above all a place of cultural proximity in the neighborhood of Sandleiten.

SOHO STUDIOS are located at Sandleitenhof in the Viennese district of Ottakring, After the restructuring of a former cinema and museum, SOHO STUDIOS now offer a venue of 660 square meter to the public. Here and with the support of the SOHO STUDIOS team, all kinds of creative ideas that serve the neighborhood may be developed.

Sandleitenhof is the largest municipal building complex built during the era of Red Vienna. It was constructed 1924 – 1928 and designed as a “city within the city”. This included an infrastructure for all areas of life and age groups: working, living, shopping, educating, entertaining, playing, resting – all within walking distance.
This built vision of the past will again be a vision for the future, to create a climate neutral city of short distances.

Many ideas that originated in the past are still relevant today: affordable housing and quality living, which includes culture for the young and the old in the immediate vicinity as well as vibrant social exchange.

SOHO STUDIOS offer a place for art, culture and social exchange to bring a new and contemporary quality of living.

That is why SOHO STUDIOS offer space, where a wide scope of ideas may be brought to life, where all kinds of exchange can unfold!

Because…
…how we live, communicate and move throughout the city, how we perceive the world and ourselves in the world – these things have essentially changed over time. But the human need for dialogue, empathy and social ties remains and will always exist in equal measure. 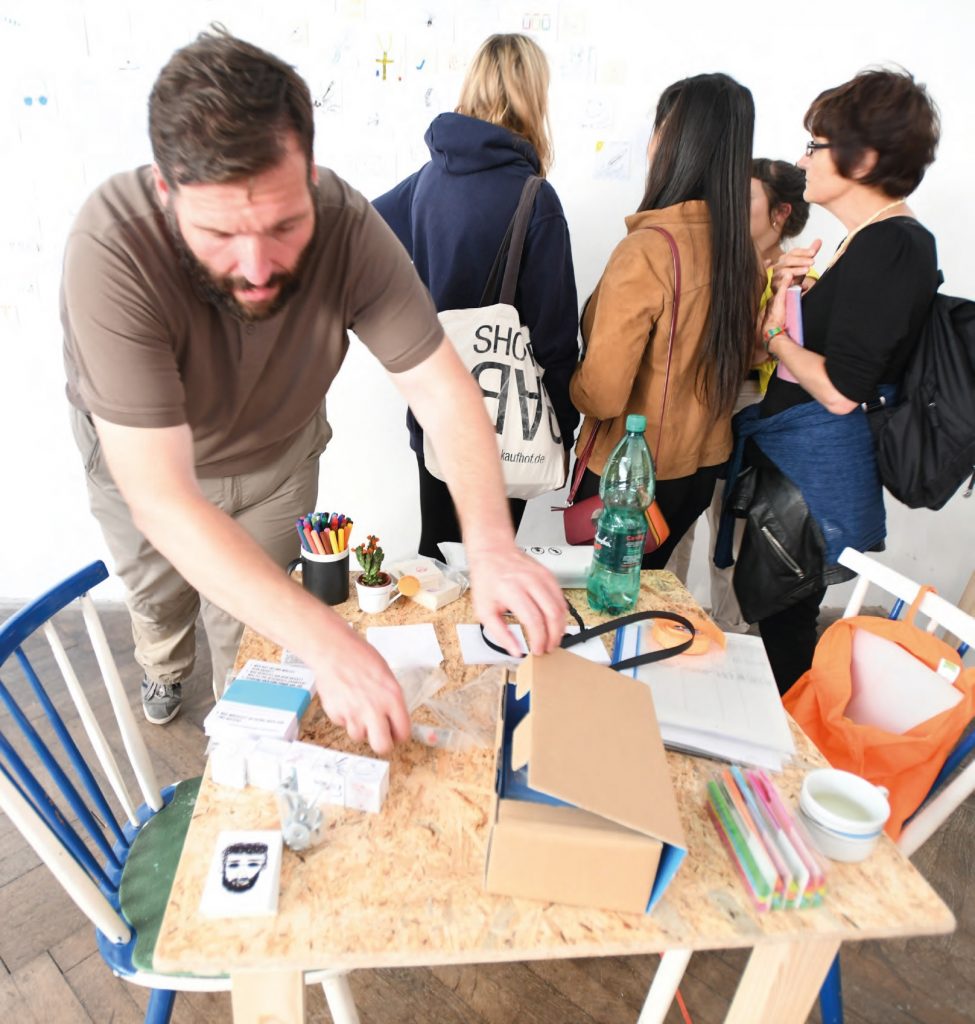 „You can only understand people if you love them.“
Rosa Luxemburg (1870 – 1919), German socialist politician of Polish origin.

Produktionskollektiv Wien, founded by Karsten Michael Drohsel, urban and regional planner and game developer. Together with the artist Irene Lucas and other associates, Karsten Michael Drohsel is creating a “Public Food Design Lab”, in which transdisciplinary projects around the multifaceted topic of food and nutrition will take place.

kunstschule.wien, a private art school recognized by the state of Austria, offers courses in Visual Arts and Applied Arts that can be attended without passing a previous entrance exam. The courses of studies offer a qualified, comprehensive and contemporary introduction into the living and working environment of “Art”.
A three-year art program creates space for experimentation, communication and the targeted acquisition of traditional and new artistic techniques and media. A total of eight fields of study are offered: Painting & Process, Sculpture, Comics, Animation and Experimental Film, Printmaking, Graphic Design, Ceramics, and Space & Design.

Osvaldo Alvarez
Osvaldo Alvarez is an interdisciplinary artist, working and living in Vienna. He graduated from the “Escuela National de Arte de Cuba/School of Applied Arts” in Cuba and has been working as an actor, director and dancer in various projects since 1985, first in Cuba, then in Austria. In the last five years he has worked as a stage designer and sculptor for different theater productions as well as directing, editing and producing in various film productions. He also gives workshops at schools.

Karsten Michael Drohsel
Karsten Michael Drohsel, *in Baden-Württemberg, Germany, is an engineer in urban and regional planning, a game developer and an urban artist. He has developed and practiced playful concepts for participatory methods and local memory discourses with various partners internationally. His work is always site-specific and close to the local reality and includes wishes, abilities, as well as the (visual) language of the participants.

Marie-Christine Hartig
Marie-Christine Hartig, *in Vienna, has been part of the artistic and organizational management team of SOHO in Ottakring since 2013. She is a freelance curator and mediator in film and art, co-director of Ethnocineca – Int. Documentary Film Festival Vienna (since 2009), founding member of CineCollective (2018) that organizes “Kaleidoskop”, summer open-air cinema and was spokesperson of the advocacy group “Forum of Austrian Film Festivals” (2018-21).

Hansel Sato
Hansel Sato, *born in Trujillo, Peru. He was assistant at the Universidad Católica de Lima and came to Vienna in 1998 with the Unesco-Aschberg grant for art. He studied painting and graphic art with Prof. Franz Graf at the Academy of Fine Arts, Vienna. He represented his country at several biennials and international events. His artistic work deals with postcolonial theory and includes figurative painting, comic, drawing and art in public space. He works in various collectives in Vienna and Peru and is co-head of the Vienna art initiative SOHO in Ottakring. Since 2015, he is Senior Lecturer at the Institute for Education in the Arts, Academy of Fine Arts Vienna.

Ralitsa Petkova
Ralitsa Petkova, *in Sofia, Bulgaria is a student of Theater-, Film- and Media Studies and Art History (BA) at the University of Vienna.

Ula Schneider
Ula Schneider, *in Vienna, grew up in Washington, D.C., U.S.A., lives and works in Vienna. After studying Art History at the University of Vienna, she worked as a freelance artist in Germany. In 1999, she founded and implemented the urban art project SOHO in Ottakring in the “Brunnen” quarter in Vienna´s 16th district called Ottakring. Since 2013, SOHO in Ottakring is based in the Sandleiten area in Vienna-Ottakring. Main focus lies on process-oriented art projects in close connection with the development of an urban area. Since 2016, she is also part of the team of “Kreative Räume Wien GmbH” and since 2019 chairwoman of the association “kunstschule.wien”.

Sonja Schön
Sonja Schön, *in Vienna, lives and works in Vienna. She studied “Theater, Film and Media” as well as English at the University of Vienna. Since 2012, Sonja Schön is a team member of SOHO in Ottakring. She is responsible for financial administration.

Birgitt Wagner
Birgitt Wagner, *in Strass, Styria, was 2001-2020 co-director and co-founder of the international Tricky Women animation film festival. She joined the team of SOHO in Ottakring in February 2021.

SOHO STUDIOS offer space for art and culture in the middle of the neighborhood of Sandleiten, Ottakring.

SOHO STUDIOS are evolving and taking shape, becoming visible and tangible in collaboration with all those who want to get involved.

SOHO STUDIOS are an open house, where everyone is welcome to participate in a respectful, non-discriminatory and responsible manner.

Those who would like to get involved, by participating or developing own ideas that may serve the neighborhood, will find support by the SOHO STUDIOS team.
· Perhaps there is a program of interest to you?
· Or you just want to have a look?
· Do you have an idea that could be implemented with the help of our team?
· Do you simply have time and want to help or collaborate?

You are welcome to write to us: info@sohostudios.at
Or drop by during our opening hours, Rosa-Luxemburg-Gasse 9.

SOHO STUDIOS are organized by the art and culture association “SOHO IN OTTAKRING”.

SOHO in Ottakring is an art project and festival in urban space that emerged from an artists’ initiative in 1999. Until 2012, it extended throughout the “Brunnenviertel” of Ottakring, Vienna’s 16th district. Since 2013, SOHO in Ottakring sets a new focus on the Sandleiten area, located on the northwestern edge of Ottakring.

In continuous work, SOHO in Ottakring focuses on aspects of urban life and district development, on possibilities of participation in the local environment by means of artistic interventions and collaborative work in process.

Collaboration with artists on a national and international level, with various local groups and institutions, and the use of public space are essential features of SOHO in Ottakring.

Since 2014, the art program included four art festivals, exhibitions, events and workshops. The venues were a former cinema and a former museum part of Sandleitenhof as well as surrounding public areas.

2018, SOHO in Ottakring developed the idea of permanently opening the doors of the vacant spaces and thus creating new life in the former cinema and museum. Finally, with support of Wiener Wohnen (the owner), the municipality and the federal government, these precious historical venues were restored and adapted to serve as a place for culture.

Since summer 2021, SOHO STUDIOS offer around 1.000 square meters for cultural events, artist studios including storage spaces and an additional classroom for the Vienna art school. 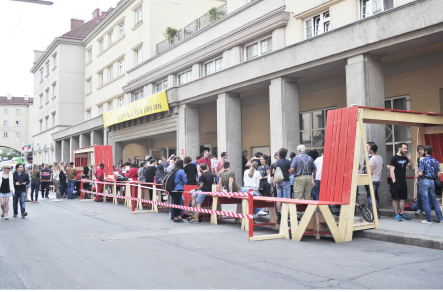 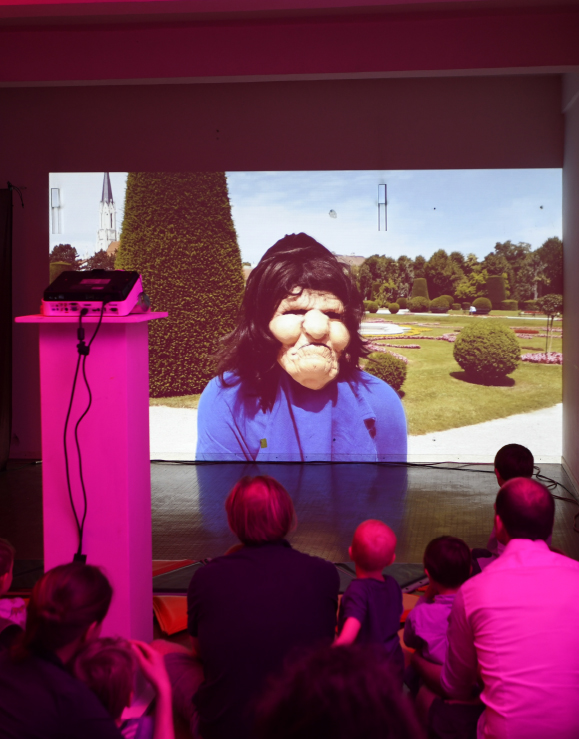 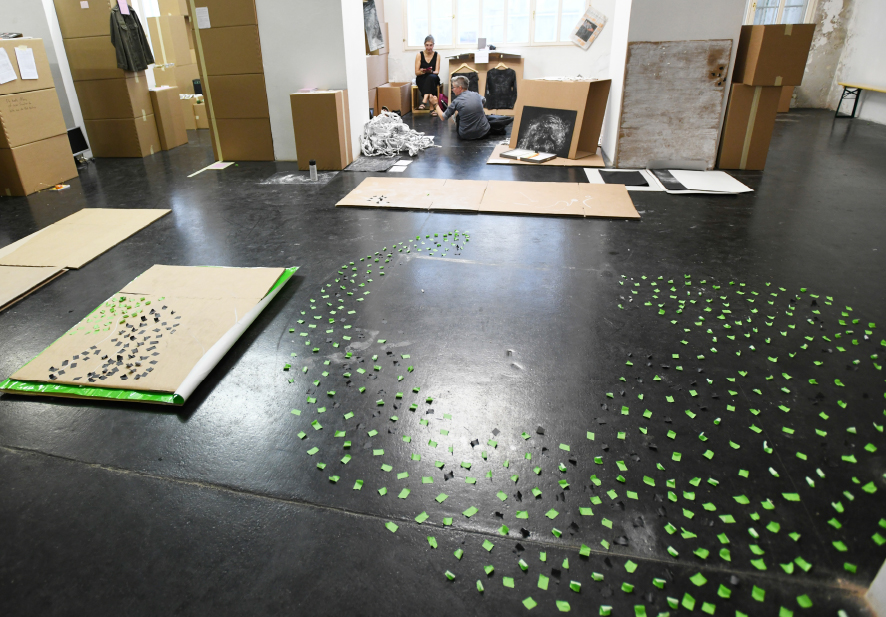